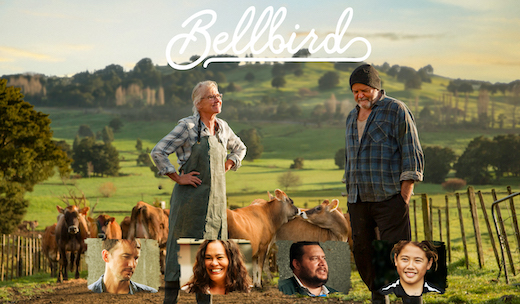 Transmission Films is delighted to announce the incredibly charming BELLBIRD, will be releasing in cinemas nationally on July 2, 2020.

Ross (Marshall Napier) has farmed the land all his life, just as his father and grandfather did before him. A largely silent man, Ross farms the land alongside his far more exuberant wife Beth (Annie Whittle), who is an eager participant in the local choir and a friend to many. When Beth suddenly dies, Ross is crushed but incapable of displaying his emotions. His son Bruce (Cohen Holloway) moves back in and tries to help, but is not suited to the farming life and also has great difficulties in expressing himself. Around them, their friends realise the difficulties, and pitch in to help.

“This delightful, heartfelt film charmed audiences at the Sydney Film Festival and we’re delighted that it will be one of the first new cinemas releases after the COVID shutdown,” said Transmission Films Joint Managing Directors Andrew Mackie and Richard Payten. “It’s warmth, humour and tenderness – all set on a glorious New Zealand dairy farm – will be the perfect movie to return to.”

“We're incredibly thrilled to share our story with Australian audiences. Bellbird is a film with empathy, a big heart and a good sense of humour. They're qualities that we as New Zealanders place great importance on. In this respect, I know our neighbours across the ditch will see a lot of themselves in the story too.” said Director Hamish Bennett and producers Catherine Fitzgerald and Orlando Stewart.