In The Home Nothing Left To Fear 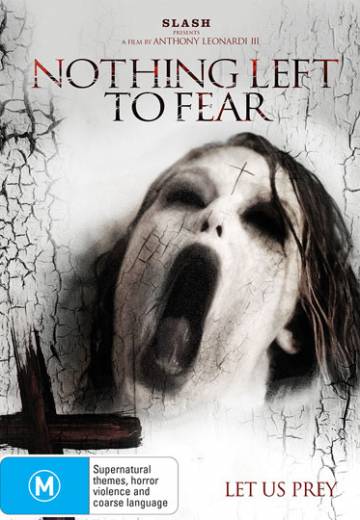 NOTHING LEFT TO FEAR was inspired by the legend of Stull, Kansas. Wendy (Anne Heche), her husband Dan (James Tupper of "Revenge") and their kids have just moved to the small town of Stull, Kansas, where Dan is the new pastor. But in this sleepy community of friendly neighbors, a horrific series of occurrences awaits them: Their teenage daughter (Rebekah Brandes) is being tormented by grisly visions. Her younger sister (Jennifer Stone) has been marked for a depraved ritual. And deep within the heartland darkness, one of The Seven Gates Of Hell demands the blood of the innocent to unleash the creatures of the damned. Ethan Peck and Clancy Brown co-star in this demonic shocker featuring original music by producer SLASH and inspired by the real-life paranormal legacy of Stull. NOTHING LEFT TO FEAR was written by Jonathon W.C. Mills and directed by Anthony Leonardi III.

The NOTHING LEFT TO FEAR Original Motion Picture Soundtrack, written and produced by SLASH and Nick O'Toole, includes the film score plus two original songs: "Nothing Left To Fear" which features vocalist Myles Kennedy and the instrumental "Welcome To Stull."